LISA vs Pension When Gifting To Children

If you’re in a position where you can gift money to your children in order for them to invest in their future, how should you go about it?

Well 2 options that are frequently bought up are paying money into a child’s pension or paying into the still fairly new kid on the block, the lifetime ISA (LISA).

In this article we will compare the two and I’ll give you my thoughts on which one is best to use. 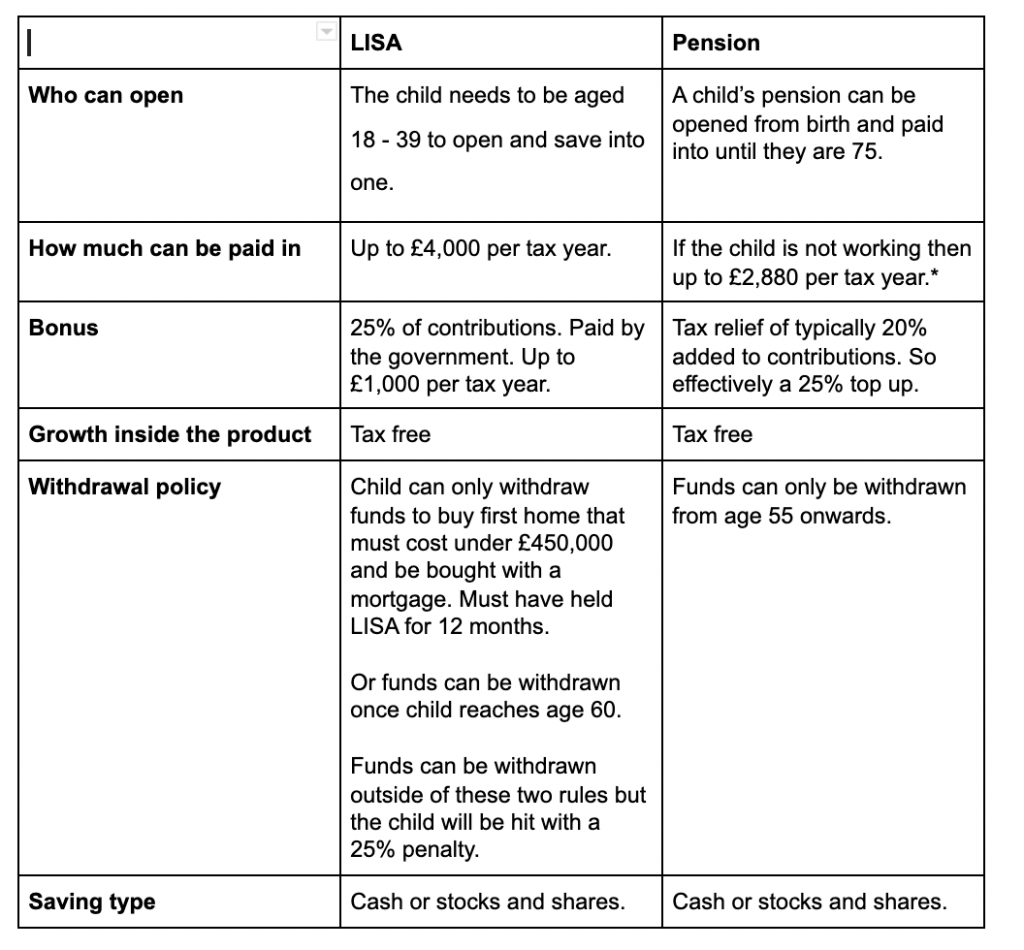 *If a child is working then significantly more could be paid into a pension, potentially up to 100% of their earnings but there are far more rules to consider.

LISA / Pension – which is best?

You can contribute more to a LISA than a pension whilst the child is not working.

The upfront ‘bonus’ is basically the same on each product but the LISA has better tax on exit as there is none! Unlike a pension where the child will likely pay tax when making withdrawals.

If you want to help your child onto the property ladder then a LISA definitely makes sense because they would be benefiting from some free money from the government.

As the child becomes a higher tax payer with better earnings. The pension makes more sense.

There are some other issues to consider.

It’s unclear how long LISA’s are likely to stick around.

MPs on the treasury select committee have called for it to be abolished believing it too complicated and not popular with young savers.

Providers in the industry however think the take up has been steady.

When it comes to providers there aren’t many offering a LISA.

Currently only 4 providers offer cash LISAs with the best rate about 1.4%. Remember current UK inflation is about 1.7% so you are still losing money in real terms.

There are also only a couple of investment LISAs from the likes of  AJ Bell, Hargreaves Lansdown and Nutmeg.

Between April 2017 and April 2019 some £1.05million in early access penalty fees were paid by holders of LISAs.

If you would like a proper gifting plan designed for you that not only reduces your own tax position but also ensures money is placed in the right products so your children can achieve their own goals in life, then why not take advantage of our free 15 minute call. You can speak to a Chartered Financial Planner who will listen to your situation, give you an outline of what you need to consider and guide you in the right direction. With the right planning you could leave a lasting family legacy rather than a bumper payday for the tax man.