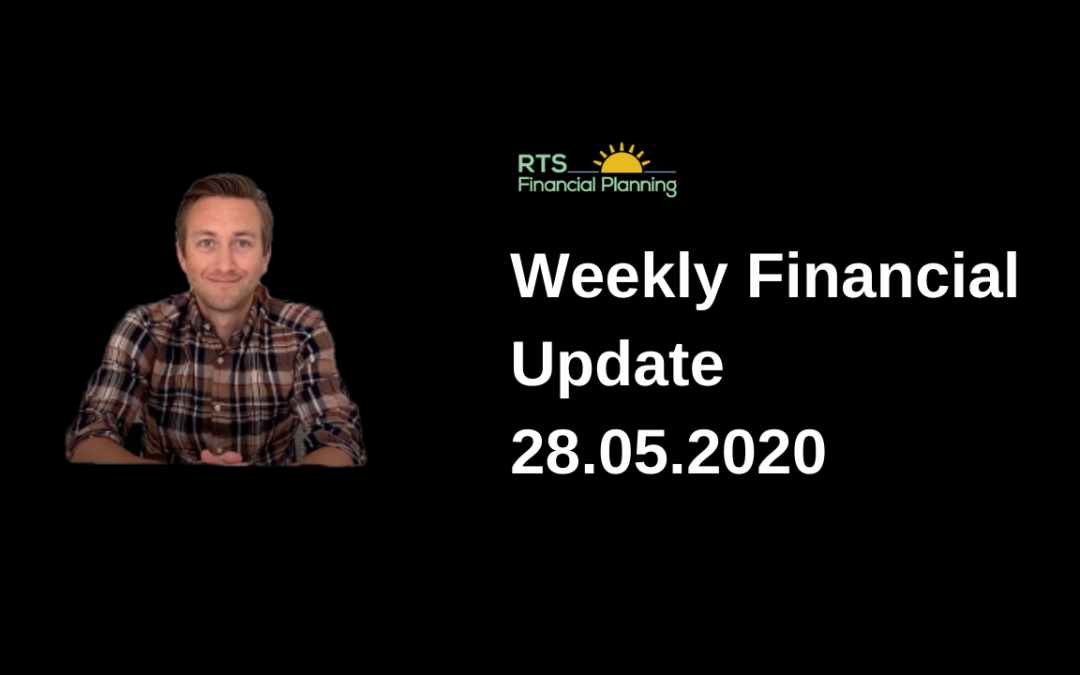 Last week I spoke about the huge bill the UK government is facing by trying to support jobs through the pandemic. Every week we find out a little bit more.

The UK’s net debt at the end of April stood at 98% of GDP. Which means we would need to double our entire economic output in one year to clear it and pay for everything we normally would. The increase in net debt over the last month is equivalent to 8 years of deficit reduction wiped out in the space of a few weeks!

VAT receipts were actually negative with the government refunding £900 million more than it received.

One of the largest insurers in the UK, Aviva, warned that property prices could fall 12% as a result of rising unemployment. They do see price growth in the longer term though.

Retail and airline stocks have had a good week.

The government announced all non-essential shops could open from mid-June.

The German government agreed a $10 billion bailout for its largest airline Lufthansa which should rescue it from bankruptcy. As it was only operating at 1% normal capacity it was losing $1 million per hour!

France and the Netherlands also agreed a $12 billion bailout for Air France-KLM.

More good news for airlines came by the way of an announcement from Germany that they will allow airline travel mid-June and Spain agreed to allow flights from July.

We saw airline stocks rise sharply. TUI shares were up 50% and IAG (owner of British Airways) were up 22%.

This is a reminder of just how difficult investing in individual shares can be. Before the pandemic large airline stocks would have been thought of as fairly untouchable in terms of risks to the business. As the pandemic started and planes were grounded, airline stocks were smashed. If you had sold out then you may be pretty annoyed now it appears things may be getting back to normal.

Remember pre 2020 when a lot of news time was devoted to protests in Hong Kong over a Chinese extradition law. Well China are coming back again with a new security law and it looks like protests are starting up all over again.

The US are not taking this news very well either. Remember the US has already fallen out with China over the handling of Covid-19.

The US has now passed a bill that could ban Chinese companies listing on US stock exchanges and de-list existing firms which could really mess up investor’s US portfolios. This is big news for China as Chinese companies can get far bigger investment via the US markets.

On the other hand, good news though if you are invested in the US stock market as it continued is recovery, nearly recouping all its Covid-19 losses.

A word of caution though. All is not as it seems. The recovery is really driven by 6 companies. The so called FAANG stocks (Facebook, Apple, Amazon, Netflix and Google) and Microsoft. These stocks alone account for over 20% of the US market.

Another reminder that individual stock picking is very hard and should only be for a small part of your overall portfolio. The part you are prepared to take significant risk with.