This week the stock markets recovered some of their losses from the previous week as investors feel confident there will soon be a new US package of measures to boost the US economy. 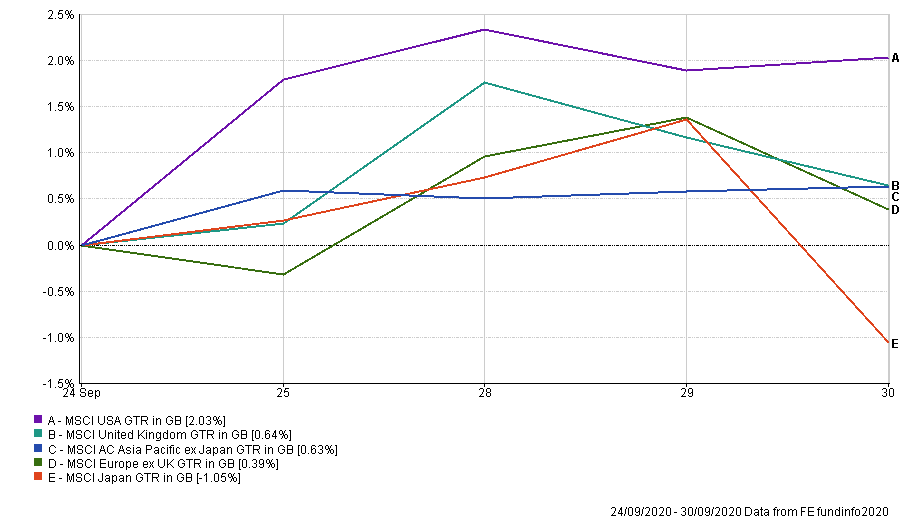 There were issues in Japan though as an unknown technical glitch shut down the whole Japanese stock market for a day. For what it’s worth Tokyo’s stock market is worth around £4.6 trillion and is the world’s third largest.

Close by there was good news in China as data showed their industrial sector continues to grow with Chinese industrial companies making 19% more profit in August than during the same time last year. China’s economy is the only economy expected to grow this year which is quite impressive in the year of a pandemic. This is good news for European stocks as China is a big customer.

In the US we saw the first live US Presidential debate with Donald Trump up against Joe Biden. The result of the debate doesn’t seemed to have changed much with Biden continuing to lead in the polls.

We will cover the US election and its potential impact on stock markets in more detail in upcoming articles. For now, investors are expecting that if Biden does win this could mean a huge increase in fiscal stimulus which will help stocks but also the potential for higher taxes in the US.

In the UK the Chancellor scrapped the upcoming Budget saying now was not the time to be planning for the future. He also announced a replacement of the Job Retention Scheme to try and support jobs and stop big unemployment numbers.

There was good news for people selling their home and perhaps downsizing as the latest Nationwide House Price Index indicated that house prices in September rose at the fastest annual rate since the aftermath of the Brexit Referendum. The average house price in the UK is now £226,129, 5% more than September last year.

More bad news for savers though as the popular National Savings and Investments (NS&I) products had their interest rates slashed. The ISA and fixed interest accounts were market leading for a while but these cuts have now led other banks to cut rates further.

This also impacts Premium Bonds. From December the prize rate will drop from 1.4% to 1% meaning you go from a 1 in 24,500 chance of winning any prize to 1 in 34,500. There will be 1 million fewer prizes given out from December.

Having said that there really is little competition around at the moment so is it really worth moving your money around? At least Premium Bonds do always carry that chance you could win big and any earnings are tax free.

The bigger point here is that you don’t want to be holding any more cash in bank savings accounts that you need to. You will just be losing money in real terms.