Financial greed must be avoided when starting a business

Do you suffer from financial greed? Are you planning to start a business or have started a business recently and you have visions of Bill Gates (Microsoft) or Mark Zuckerberg (Facebook) and all the money they make?

If making lots of money is your sole or even main purpose of starting a business then I want to make you aware that you are likely to fail.

You see Bill Gates and Mark Zuckerberg never had financial greed as their reason for starting their businesses. Bill Gates wanted to bring computers to the people. He wanted every home to have a computer in it. Mark Zuckerberg started Facebook because he wanted people to be more connected. They didn’t start their businesses to make lots of money and become rich. They actually avoided financial greed by living very modest lifestyles during the early stages of their business and focused on their passion.

The problems with financial greed

I’ve recently finished reading ‘Shredded: Inside RBS. The Bank That Broke Britain’ by Ian Fraser. It’s a really interesting look back at the financial crisis of 2007/8 and how financial greed brought down the Royal Bank of Scotland.

Most of you may already know the story of RBS but for those who don’t or those that want a quick reminder, RBS was once one of the world’s largest banks. It employed over 200,000 people and had millions of customers.

Under the leadership of its former boss Fred Goodwin it expanded rapidly, they bought a number of other banks (including NatWest) as a way of increasing their empire. They made risky loans, thinking the economy would continue to grow and grow. They sold their customers risky products that were never appropriate for them.

Fred Goodwin ruled RBS with an iron fist and suffered from financial greed. He spent £18m of the bank’s resources on a corporate jet which he then often used to fly around the world watching formula 1 motor racing. He spent £350m on new lavish RBS headquarters in Scotland and $500m on US headquarters.

It got so bad at RBS that the financial greed of Fred Goodwin filtered down to other top bankers in the company and in the end the pursuit of more and more money led them to participate in illegal activities for which they are still being investigated for now.

The problem with financial greed is that it makes you complacent. The pursuit of more and more money will make you cut corners, forget about your customers and staff and will lead to a bad culture within your business.

In the end RBS basically went bust and only survived because the UK government bailed it out using money from our taxes. Fred Goodwin was removed from RBS in 2008, lost his knighthood in 2012 but still survives on his £342,500 per year pension! 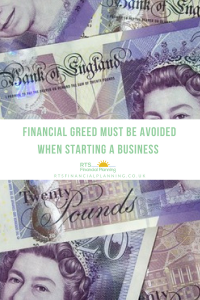 Better things to focus on than financial greed

So rather than financial greed why should you start a business?

Well you should start a business if you have a genuine passion to deliver value to people. Whether that’s through knowledge, a product or a service. You should want to make a real difference to people’s lives.

Once your business is up and running and making you money you should still avoid financial greed and instead do the following:

1. Always look after your customer

Customers are the lifeblood of your business, without them you are nothing. So treat them carefully, always think of them and try to never let them down.

You see customers will suss you out when you stop caring. It may take a while but eventually they’ll notice when your services slip or you’ve stopped providing the value you once did.

When your customers have had enough they will leave you and the bad feeling will spread to other customers and then it will be very hard to win them back.

2. Keep investing in your company

Whether it’s knowledge, staff, equipment or software for business owners you need to ensure you always have the best tools for the job. Yes it’s a cost but if you avoid thinking about financial greed, the investment should pay you back in the long run with improved service and efficiencies.

One of the big problems for RBS was that they didn’t spend enough money upgrading their IT systems which meant they couldn’t monitor the inner workings of the company like they should have been.

3. Always stay up to date

As we have already discovered through the RBS story, financial greed can make you complacent. Once the money starts rolling in there is a tendency to think you have made it and you stop trying to improve.

The problem is there will always be someone out there that will come along and do it better. Before you know it you have been left behind and your income will soon dry up.

If you continue to focus on the above 3 areas, do this well and never stray from providing value, do you know what? The money will eventually come to you anyway!

But never let financial greed take over. Always go back to your original ‘why’, why you started the business in the first place. The minute you lose that passion to provide value it’s time to get out and do something different.

A weekly email which contains insights, news and tips on how to generate wealth, protect it and help you find your financial freedom.